Alongside continuing work with Ballet Cymru, I’m currently painting a series of pictures for Well Thumbed, a theatrical celebration of innuendo and sexual subtext in great literature, created and performed by Terry Victor (whom I painted in 2013 as part of my Performers series).

Terry invited me to produce images to be exhibited alongside performances – portraits of writers who feature in the show, made with reference to historical photographs, paintings, sculptures, etc, or from the imagination. I thought this was an intriguing proposition, involving a very unfamiliar approach to painting, so I’m giving it a go.

Pictures will be shown at a number of performances in Wales and England in July this year, and then during the show’s run at the Edinburgh Festival throughout August.

Thanks to Terry for the opportunity.

Back to all articles 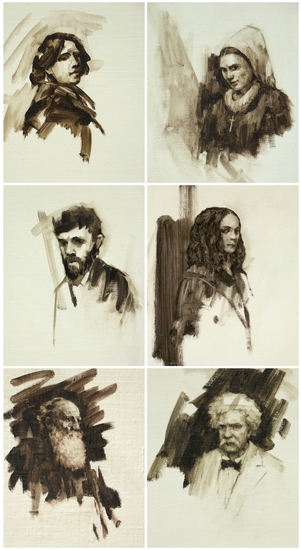